I haven't mentioned the room I'm designing at my mom's house for a while.  It's still a work in progress, but it's ALMOST finished.  I can't wait to show you the reveal!  I have been doing lots of little projects for the room.  The bed in the room needed pillows, so I decided to try something I've seen other people do: make pillows out of drop cloth.
So I started with a drop cloth I got from Lowe's for $9.99.  I also invested in a rotary cutting tool and a cutting mat.  (I can't believe I just now bought one!  I should have a LONG time ago!) 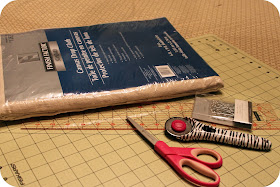 #1: Stenciled Pillow
I used my Silhouette to create a vinyl stencil of something my mom always says: "Love you more."  After figuring out what part of the fabric would be the front of the pillow, I used regular craft paint and a stencil brush to fill in the design.  After the design dried, I followed the envelope pillow directions to finish the cover. 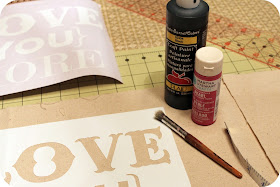 #2: Ruffled Pillows
I wanted two of the pillows to have ruffles on them.  I had some fabric scraps from another project, so I used those scraps to create ruffles.  I found this super easy ruffle tutorial, so making the ruffles took no time at all!  (The one thing I did different from the ruffle tutorial is that I folded my fabric strips in half with right sides facing, sewed a tube, and turned it right-side-out to keep from having raw edges on my ruffles.)  I spaced them out evenly on what was going to become the front of the pillow cover.  I made sure the ends of the ruffles would be on the edges where I was going to put a seam.  I sewed the ruffles on and then followed the envelope pillow directions to complete the pillow covers. 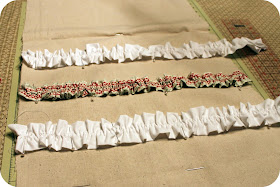 I stuffed my pillow forms in the completed covers, and here they are! 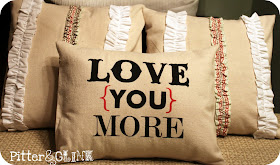 I absolutely adore how crisp the stenciled lines are on the love pillow!  When I finished, I thought, "Wow!  This looks professional!"  I like the ruffled pillows too, but I wonder if I should have put more ruffles...  I think they're okay the way they are, though.  Here's one more pic! 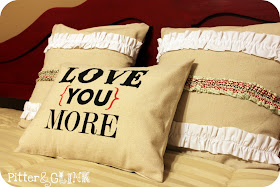 It's SEW amazing what a drop cloth, scrap fabric, and some paint can become!
Share

Thanks for taking the time out of your busy day to leave an awesome comment! :)